It's a Cold Dark Universe

What better way to remind us of the universe as a cold, uncaring vast expanse and the prevalent threat of sudden death than space sims. The tradition started with the '80s classic Elite has been carried on with many 21st century titles that focus varyingly on trading, mining, combat, or just flying around in the space sim version of lurking. Among these sims are many freeware titles, and now that I've recently done a run down of first-person-shooters still available on PowerPC, I figured I'd do the same for space simulators. 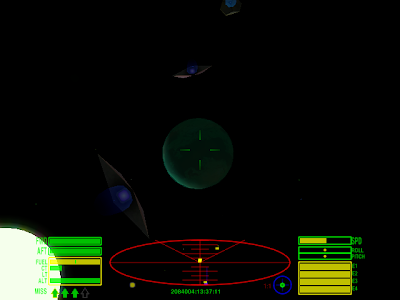 We should start with Oolite since it's the most directly inspired by the original Elite. Like Elite, Oolite is open-ended, meaning what you do in the universe is entirely up to you. Wanna be a pirate? Go for it. Out of the box, the graphics are somewhat rudimentary, but you can change this by installing among tons of expansion packs -- ships, skins, HUDS, sound packs, and more. The stable release requires Tiger and is a universal binary, but their development release seems to require Intel and Leopard, so it looks like PowerPC development for OS X is dead unless someone wants to take the source code and run with it. Debian users can install the development release from their testing repositories, but given the state of PowerPC graphics drivers on Linux...ugh. 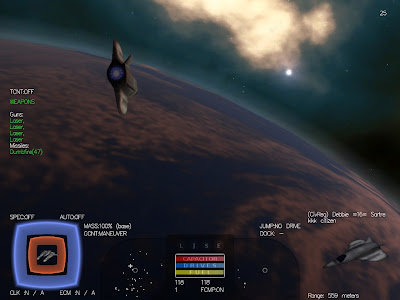 Similar to Oolite but perhaps more elaborate is Vega Strike. Their OS X download is a version behind the latest release and seems stuck there. I think they're looking for packagers. One weakness compared to the others on this list is its startup time, which is disconcertingly leisurely. It's also more demanding in the graphics department, though you can tone it down in the settings to play fluidly on almost any configuration at the expense of prettiness. Like Oolite, this is open-ended, too, though the universe here seems a bit more populated. Unlike Oolite, it's so complex it's hard to get into and start playing right away. Thankfully it comes with an extensive PDF manual. The more you're into this genre, the more you'll enjoy this. 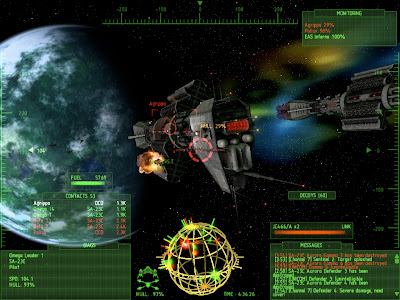 Finally there's Babylon 5: I've Found Her. If you think Babylon 5 refers to the TV show, you are correct! IFH is a fan-made game from a couple of Russian developers, probably the best fan-made game you'll come across. Unlike Oolite and Vega Strike, IFH is mission-oriented rather than open-ended. It puts you in the cockpit of a starfury and is mostly focused on shoot 'em up style action, though there is some exploring as well. Fan-contributed missions can be downloaded from the FTP link in this thread (the unpacked files have to be manually installed into the app package -- ooo, fun). There's also a Simulator mode for quick dogfighting action. For training purposes, of course. Not to satisfy any blood lust. That would be unseemly.

Another option is FreeSpace Open, which requires the purchase of the original FreeSpace 2, and you also need a Windows system to extract FreeSpace 2's data files. Instructions for installing this on OS X are at the FreeSpace Wiki, though from the look of Youtube clips, FreeSpace Open might be too graphics intensive for all but the fastest G5s.
Posted by Dan at 11:39 PM 3 comments

Email ThisBlogThis!Share to TwitterShare to FacebookShare to Pinterest
Labels: Games, Space Sims, The Only Future Is Entropy

(UPDATE: Newer versions of PPC Media Center look somewhat different than the screenshot below and have additional features. The download link at the bottom has been updated to the latest version.)

I ought to complain more often. Just a few weeks ago I wrote a post about Vevo branded videos on Youtube breaking third party downloaders. Youtube-dl was the only one that worked, and it being command line, was slightly inconvenient. Well, lo and behold, good fortune knocked on my door (sent me email) and Adam A. left me a cool new Applescript app called PPC Media Center (download link at bottom). It's a simple and elegant GUI frontend for youtube-dl, and I can report on good authority that it's awesome.

Basically it works by copying a video link to the clipboard, launching the app, and pasting the URL in the text field. You can also assign a hotkey (with a tool like Spark) and use it to launch PPCMC QuickLaunch.app which makes the URL pasting automatic. More on that in the documentation. Either way, you'll see three buttons, all of which are fairly descriptive. From my testing on Youtube, the download and streaming buttons will give you choices of quality and then you're on your way. Streaming opens in Quicktime (Perian plug-in recommended), and the download button opens a Terminal window to show your progress. The "Check for Updates" button did just that and asked my administrative password to update youtube-dl in my /usr/local/bin.

All that and a cool icon.

Another cool thing, this being Applescript, is you can edit the script inside the app package with Script Editor.app. There's a little about adding site quality profiles in the documentation, and I wonder if it's super complicated to change the player from Quicktime to VLC or Mplayer. As the documentation notes, if you do make changes use the "Save" and not "Save As" command to avoid damaging the app bundle, and keep a backup copy of the original.

One more note, you may notice on the right I've added a new link to my blogroll. It's Mac OS 9 Lives, and it has a special focus on audio workstations and music producing which was always a strength of the classic Mac OS and still is. They also have an active forum section, so go check them out!
Posted by Dan at 10:35 AM 7 comments