Android and Your PowerPC Mac

A week ago my wireless provider texted me saying they'd no longer support their 2G network and I needed to upgrade my phone. Up till now I'd been living my namesake and happily using my candy bar 2G phone, but now that reality has come crashing down on me and I have to join the 21st Century or something. So I thought I could buy another dumb phone that supported 3G, but then I thought for a little more I could get an Android phone and maybe milk it for a blog post or two about using Android with our PowerPC Macs. So here we are!

I got an unlocked Motorola Moto E, which was the least expensive smart phone that still got good reviews. I don't expect to be a heavy user, so it suits my needs. I'll miss my lighter than air Nokia whose battery lasted forever and also didn't nag me about software updates every five minutes. Apparently progress means being a perpetual beta user. However, I was pleasantly surprised at how easy it is to share data between the Moto E and my Powerbook, and not just over a wireless connection. It works through USB, too.

Right out of the box with no additional software, you can upload photos through USB by tapping the notification that appears when you connect the USB cable and then changing the transfer protocol from Media device (MTP) to Camera (PTP). If the notification doesn't pop up, you can also go to Settings --> Storage and tap the upper right button and select USB Computer Connection. There you'll see the same MTP and PTP options. Shortly after you select PTP, your default photo importer in OS X such as iPhoto or Image Capture will automatically open and you can select which photos to import. So far so good!

However, to transfer all other data such as music and documents, you need MTP which doesn't play natively with OS X. Fortunately there's a piece of software for Tiger that allows you to connect via MTP and transfer all your other data. It's called XNJB, and though the official version 1.5.9 claimed PowerPC support, it doesn't work. That's where Cameron Kaiser came in and compiled his own version that works and has made it available for download through Floodgap. It must be noted, though, he offers absolutely no support for this. So please don't bother him with bug reports or feature requests--he compiled it for his own use and is throwing it out there in case anyone else finds it useful.

Those disclaimers aside, I found it works perfectly (just make sure your phone is set to MTP, not PTP). You start the application with your phone connected and you're shown two browser panes for uploading and downloading. You can also create new folders on your phone with the Create Folder button. The "X" button predictably deletes items. 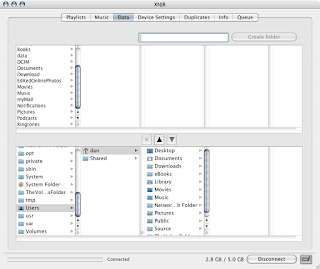 With that, I can move all the data I want back and forth. As for sharing data over wifi, you can set up your Mac as a Remote Login server in Preferences --> Sharing and then use an Android file manager that supports SFTP to establish a connection and move files. I tried it with ES File Explorer, and it worked fine.

For transferring via USB, Linux users don't need to do much except install gvfs-backends if they don't already have it, and their Android device will mount in their file manager. A supported operating system does occasionally have its charms.

I haven't really looked into pure syncing for things like contacts and calendars, but perhaps there's a way to do it by using Google services as a go-between. Syncing email is easy if you have IMAP.

So I hope this blog post served you well and was worth me giving in to the smart phone fascists. I've been tempted to throw it into a wall a few times, but maybe that'll subside. I still have a few weeks left to return it for a refund ;)
Posted by Dan at 10:49 PM 6 comments

Email ThisBlogThis!Share to TwitterShare to FacebookShare to Pinterest
Labels: Androids Playing With Tigers

Getting an SSD for Your PPC? Here is Some Important Info That Might Help

(Ed. note: The following is by Adam Albrec, author of PPC Media Center, cross-posted here from various other places. It's about SSDs, and since there's virtually nothing on this blog about SSDs on PowerPC Macs, I thought I'd include it here with his permission.)

I just got an OWC 'TRIM-Free' ssd for my MDD DP 1.42. At first, this was easily the best performance I've EVER had on this machine - OS9 level peppiness even running Tiger with heavy apps like TenFourFox. Opened 2 9000x6000 pixel images in Photoshop and doubled them by 10% increments, then opened TenFourFox with 50+ tabs - could move between PS History-states and then back over to TenFourFox and cycle tabs with no-more than 1/10th second delay!!!! Was ROCKIN' 11GB of Virtual Memory!

BUT it all came crashing down in less than a day.

The drive became completely unresponsive and I could not get any further than boot. Thought: "Knew this was too-good to be true!" Well OWC tested the drive and reported back it was fine!?!?!? To be on safe-side they sent another knew one and adviced me to attach to newer machine (Linux in my case) and verify it had newest firmware before using. Well this meant having to partition to MBR so Linux could see it. Well, once it was verified, I repartitioned back to APT to put in the Mac, but suddenly it was unresponsive again like the 1st one! Well to use the parlance of our time - WTF?

So it was time to get me some edumacation into this stuff. The reason Sandforce controllers don't need TRIM is that they do it themselves when the drive is idle. On a modern system, with copious amounts of RAM, the only time the 'Garbage Collection' function is noticeable, is when large numbers of blocks are being reclaimed. In older OSX systems with 2GB RAM limits, this becomes much more likely than in newer systems.

So what to do? In this case, the drive was 120GB (for $64 = Good Deal), I had initially partitioned it into 2 sections (80GB for OSX and 40GB for OS9). On a light day, maybe this would be fine, but on those 'Heavy-Flow Days', I can easily push 20GB or so onto VM, so I either plan on allowing for periodic down-time or give the drive all the room it can support to enable maximum paging flexibility. The second idea has been great and no more problems. Also, some have said that with Sandforce's drives this also makes sense in wear-leveling, because the more of the drive is available, the more it can spread the data around, and the drives also auto-recopy data periodically to make sure it stays fresh.

Boot-times/program load times aside, one of these SSDs are the best investment you can put into your classic PowerMac. Like having virtually limitless RAM. But you need to allow it more openspace to auto-maintain (for G4/32-bit systems at least 40GB).

Also while they do still offer the 'Legacy' IDE/ATA versions, there is no reason to pay the extra $40 when an IDE/Sata adaptor (at least if you are on a desktop with the room inside) like this one http://www.ebay.com/itm/Pata-IDE-To-Sata-Hard-Drive-Adapter-Converter-3-5-HDD-DVD-Parallel-to-Serial-ATA-/171424564491 is available for about $6 and works like a charm.

•• Note on IDE/SATA adaptors: The smaller inline ones like mentioned above, generally have a 2TB limit. Larger drives often require a PCI card. Also, they sometimes add an additional 1-second delay to Access/Spin-Up times. Once data starts moving, there is no delay, but if your only drive is an SSD, it might make sense to experiment disabling 'disksleep' on pmset in Terminal. Even in this case, however, there will occasionally be a momentary searching during bootup for the system folder as the card comes to life. This is normal.
Posted by Dan at 11:34 AM 9 comments

Does Tim Cook Care About Macs? 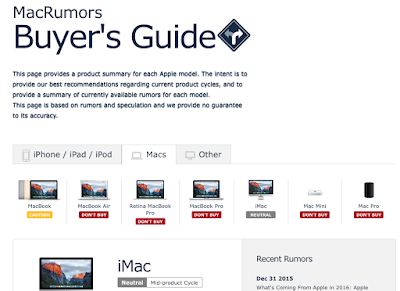 Email ThisBlogThis!Share to TwitterShare to FacebookShare to Pinterest
Labels: That Mac Pro Is Almost As Old As PowerPC