If you've been perplexed and flummoxed by the crash-on-startup problems with webkit browsers, a fix appears to be on the way. This Ubuntu bug report has several links to other various bug reports on the same problem, so if you want to delve in deeply, go crazy. There are also patch files for testing posted here. The Debian bugs marked resolved indicate the patches will migrate into Testing soon, so hopefully our Long Webkit Nightmare will be over.

You may have heard of Ubuntu Mate, which as the name indicates brings the Mate desktop to Ubuntu. In a bit of good news, they've announced their 15.04 release will officially support PowerPC. If you want to test their beta, go visit their download page (they prefer you choose the torrent download). Also, check out this screenshot sent by rican-linux of the Mate desktop + Numix theme: 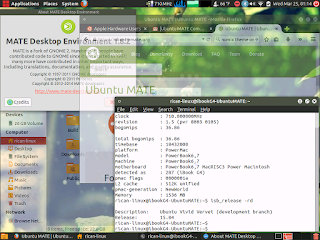 Finally, there's a new fork of Debian as a fallout from the whole systemd debacle. Now that Debian basically requires systemd, an association of system administrators has left the Debian project to produce a fork promoting init freedom. Their project is called Devuan and they promise a seamless transition from Debian 7 to Devuan 1. We'll see. I wonder if they'll support PowerPC and other architectures.
Posted by Dan at 12:11 PM 3 comments