Color calibration has never really been a problem on Macs with built-in monitors like iMacs and 'Books of various sorts. Naturally, since they make both the hardware and software. The picture is bright, and the colors are warm and vibrant. The same can't be said, though, when you introduce anything non-Apple into the mix like a third-party external monitor, or booting into Linux. In those cases, the default color temperature tends to look too blue, too cool.

If you have an external monitor, that isn't a problem as you can just reach up and adjust the color temperature manually on your monitor's controls, but if you're booted into Linux and you're on an iMac or a laptop, you don't have that option. You need a software solution, and as chance has it, there is one. It's called Redshift, and it's a cool little command line utility that was originally intended to adjust the color temperature of your screen according to the time of day, but there's also a "one shot manual mode" that lets you adjust once to a permanent setting.

To change your screen's color temperature, you just need to type one simple command:

where colortemperature is a number in Degrees Kelvin (the default seems to be 6500). Also, the -O is capital O, not zero. So if your iMac or laptop screen is too cool, try lowering the temperature number a little, to say 6200, for a slightly warmer picture. On my iBook, I eventually settled on 6250. An easy way to calibrate your screen correctly is to hold up a Macintosh laptop booted into OS X next to it and make them match.

Now put that command in your autostart file or a startup script and you're good to go.

I've written before about Xgamma which I used to adjust the gamma level, and I also tried it for warming up the screen by adjusting the red, blue, and green levels separately, but I could never get it quite...right. So Redshift really comes to the rescue here.

Also monitor related, if you're using an external monitor connected to your laptop, I discovered a simple GUI front end for xrandr called LXRandr. 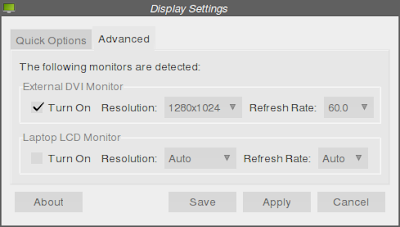 So if you were trying to deal with xrandr from the command line to put your laptop display to sleep and set the resolution for your external monitor, this significantly simplifies things.
Posted by Dan at 9:11 AM 4 comments

Taking TenFourFox 24 Beta Out for a Test Drive

I've been looking forward to TenFourFox 24 with a bit of trepidation. I'd gotten used to TenFourFox 17's safe, it-just-works confines, but all ESRs must come to an end and 17's time is almost up. It's time for 24 to be the new stable release, but if you've followed the TenFourFox Development blog, you'd know the road toward 24 has been a somewhat torturous one. Cameron Kaiser has been leaving hints and intimations that the new javascript interpreter necessitated by Mozilla's switch to IonMonkey might mean a hit in performance, and after much work he can now report that it's "not an utter disaster." I've heard worse words.

So how does 24 measure up in the wild? After downloading it, I started the browser and was immediately confronted with a frozen tab bar. I closed the window and brought up a new one and I haven't been able to reproduce the issue. Maybe an Australis gremlin. Anyway, the speed is what I'm here for and to see for myself if there are any regressions. And I can report, in my non-benchmarking way, that the difference is monumentally, horrifyingly...nil. I honestly don't notice any speed difference between 17 and 24, and if anything, the GUI (menus, scrollbars, etc.) feels a bit snappier. So bullet dodged, and with IonMonkey more fully implemented in later releases, it looks like things will only get better.

The only difference I saw was in memory consumption. It was usually in the 300-350 MB range vs. 17's 250-ish range. I don't know if that'll be optimized in the future. But overall I'm happy and I'd say don't hesitate to upgrade when the final is released in December.

Also, a reminder for Leopard users, SeaMonkey-PPC and Leopard-Webkit are still making builds for PowerPC, so give those a shot, too.
Posted by Dan at 10:18 AM 3 comments

Email ThisBlogThis!Share to TwitterShare to FacebookShare to Pinterest
Labels: Betas Are Good When You Want To Force Gremlins Out In The Open And Beat Them With A Stick, Just Beat The Living Crap Out Of Them

Own Your Owncloud on PowerPC

Last time I wrote about syncing, it was about syncing files over your home network, but I was also curious about Owncloud, an open source cloud server, for syncing over the web. As luck would have it, a couple of links came my way from Owncloud's forums about getting it to run on PowerPC. The first link is a post on compiling for Leopard, and the second points out Owncloud is now in the Debian Jessie repositories. So to get it on Wheezy, just change your apt sources.list to download the Jessie packages before changing back.

Once you have everything running, you can sync with your web server or even your home server, and you get some nifty calendar, contacts, and music features, too.

On a semi-related note, I have a cloud server of sorts with my Mediafire account where I keep uploads like Transmission QT 2.31 and other PowerPC related stuff. I bring this up because Peter S. sent me his version of Open Arena specially compiled for G3s (altivec disabled), so I uploaded it and here's the direct link.

Now thanks to Peter you can have a G3 and still get your Quake 3 game on.
Posted by Dan at 9:03 AM 2 comments

I've gotten a few emails recently that I thought I'd share with you. First off, Michael C. points out his new Quadras, Cubes and G5s blog. It's a WordPress blog, so it looks much nicer than mine :) Also, he's been rummaging around the University of Michigan Software Archive and found something I've always been curious about--a CPU meter for OS 9. So go over there and check out the full story!

Reader Gaël E. informs me of a handy tool to create applications that run from OS X's menubar. It's called Tapir, and it also has a sequel called Platypus. Check out Tapir's screenshot page to see what it can do with the "df -h" command. There are many many more possibilities.

Finally, K.M. sent me a cool screenshot of a GTK-ish app running on Leopard. It's a media collection manager called Griffith that only officially supported Snow Leopard, but with the dependencies listed on their download page, K.M. compiled it and got it running on PowerPC. It's using the DVDEmpire plugin which can be found along with many other updated plugins on this berlios page (many of the plugins that came with the application are now out of date). 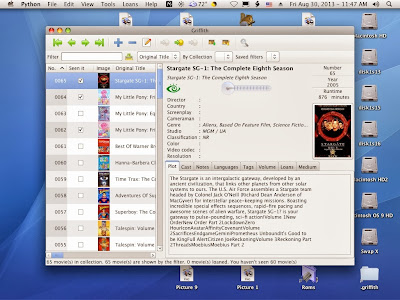