My Power Mac 7600 died. At least I thought. It was a dead power supply, and also extremely disappointing (Do you hear that, 7600? I'm not angry, just disappointed.). This 7600 was da man. It was my vinyl ripper with its built-in RCA ports and Coaster, and it was also my bridge machine, the only Mac I could directly network to my post-SCSI Macs.

So I checked out Ebay and saw just one power supply available for 30 or 40 dollars plus shipping, but before I contemplated that, I took another look at the stiff. Was my dead cadaver power supply dead after all? I opened the case and was shocked to see how much dust was in it. The power supply had it packed in so that when you slid the frame off you had a brick of dust. Disgraceful. I think that's why I forgot to take pictures–my subconscious was too ashamed and didn't want anyone to see.

Anyway, I thought, maybe if I get all this guck out it'll magically awaken. Wishful thinking, admittedly, but being single-task minded and obsessive, I proceeded. I opened up the power supply and...

***IMPORTANT SAFETY WARNING***
When working inside a power supply, it is exceedingly likely you will receive an electrical shock, and a powerful one, unless you take safety precautions. Never touch anything with your bare fingers. Never reach inside it with anything metal. Power supplies can hold an electrical charge longer than you might suspect, so be careful.

...using a modelers paint brush with a plastic handle, I brushed all the dust out. Back up a second. First I gave it a good blow and immediately realized my mistake. After letting everything settle, I more sensibly applied the modelers brush and didn't stop until every last bit of lint was removed. What I had left was a pristine power supply, seemingly, that probably wouldn't work, but at least it looked nice. I also read on some random forum that I should blow a hair dryer on it while set on hot for a couple of minutes. Not to cook it, but just to warm it up a bit. Well, if the internet tells me to do it, I'm doing it.

So after blowing the hair dryer on it, I reassembled the frame and stuck it back in the 7600. I do wish the 20 year old plastic wasn't as brittle as toffee. At least you can eat toffee. Then I put the case cover on, hooked everything up, plugged it in and pressed the power button quickly without thinking about it 'cause I didn't want to jinx it by waiting one more second, and holy s---, it worked. The fan spun, the chime chimed, and that sweet SCSI whine of the hard drive spinning up followed.

Was it the de-dusting? The hair dryer trick? My stern looks of reproach? Dunno. But since none require superhuman effort, I recommend all three. Having said that, I probably just got lucky.

While in the business of reviving things, I got the idea to fix a dead Seagate SCSI drive with a new screwdriver set I bought. This drive had its circuit board exposed on the top and was vulnerable to physical damage (don't ask), but I kept it stashed in a box with vague thoughts of one day fixing it. Fifteen years later, I finally got the idea to switch out circuit boards. Or I probably got the idea before, but I just forgot about it. Anyway, since I now have every screwdriver head imaginable and a second identical model drive that I bought way back when as a replacement, suddenly it seemed imminently doable. So I unscrewed and removed the damaged circuit board, replaced it with the good one, and now I could finally see my desktop as it was, frozen in time, 15 years ago: 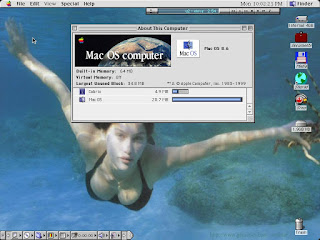 The wallpaper is a Laetitia Casta underwater shot (I took that), and I think the icons are from AppleWorks clip art.

The universe couldn't let all this good news go unpunished, so to even things out my iBook died. It's either the DC-in board or the motherboard, but the battery still charges, so I'm 99% sure it's the motherboard. Repeatedly yelling at it, "You bastard! You bastard!" hasn't worked yet, but I'll keep you updated.
Posted by Dan at 11:59 PM 3 comments