Reader Eric H sent me these screenshots I thought I'd share. They're of Debian/MintPPC Wheezy on an iBook G3 600 MHz with custom theming. Very cool. 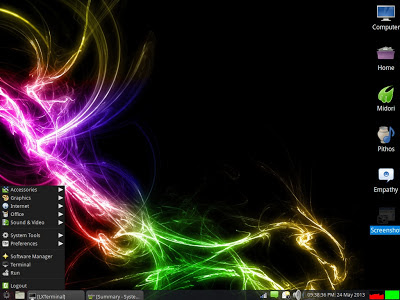 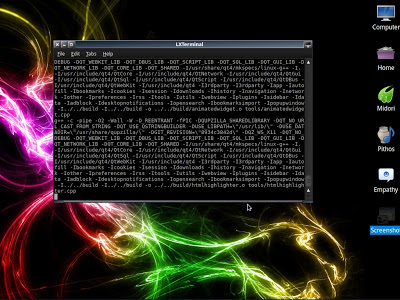 Also, MacRumors poster Wildy left an update on a Crunchbang-like port for PowerPC, hopefully to be released later this summer. Screenshot is here.

So put one of these distros on your 'book, take it to a coffeeshop, and get ooos and ahhhs.
Posted by Dan at 11:38 PM 4 comments

Email ThisBlogThis!Share to TwitterShare to FacebookShare to Pinterest
Labels: Linux, Look At That Form Factor!

I sometimes meander on the web a bit and read Linuxy things that are mostly over my head, and when I read about qt vs. gtk and how qt was the future, I suddenly decided I hate, no, despise, gtk apps. I don't know what triggered this sudden insatiable need to minimize the gtk look from my life, but here it is. Maybe it has to do with using a couple of qt apps like LMMS and Hydrogen, which just look and feel more professional. I also had a brief misadventure burning a CD and couldn't bear to look at another half-assed GUI, so I installed a couple of command line tools to solve my problem. And I got to thinking, I should be going to the command line a lot more. There's something about it that's more fun. So I went down a list in my head of all the programs I could use in a terminal instead of a GUI when I came to file managers. I'd been using PCManFM and Thunar and was never totally satisfied with either, plus I was growing to hate that gtk three-pane look. So I thought, "I'll just do it all in a terminal and brush up on my rm -rf / commands" (joke--don't run this). But then I remembered another file manager, ROX-Filer, that I wanted to take another look at.

I used it once before, but I guess it was a little too eccentric to take an immediate liking to. Eccentric in that it wasn't like all the other Linux file managers, but on a second spin it reminds me of something from the past. If you ask, "The Mac OS Finder?" give yourself a prize! Look at the screenshot below and you'll see ROX-Filer values the same simplicity.

Ironically, I guess, it's a gtk app, but it has a very minimal look with no menu bars or double or triple panes and borders that look like they were made by grade school students. And there's one more thing you get with this minimalism--speed. ROX-Filer is fast. When opening the first time, it's fast. When opening multiple windows, it's fast. When loading hundreds of jpeg thumbs, it's fast. It leaves PCManFM and Thunar in the dust and brings back the feeling of the old Finder.

I've quickly grown accustomed to navigating in it. You can open new folders in the same window much like the OS X Finder, and you can also open folders in new windows with middle-click (Note that ROX-Filer is set to open folders/files with single-click by default, and if you change it to double-click, using middle-click to open folders in new windows doesn't appear to work. You instead have to right-click and choose New Window from the options.). Another useful item is the bookmark toolbar icon (the diagonal arrow button in the screenshot, your icons may differ). Here you can set bookmarks for all your commonly accessed folders, including /media/cdrom0 which is where your mounted CDs and DVDs are.

The only thing I didn't like was MIME types weren't automatically set, so to launch a file you have to set the run action manually for each file type the first time, though after that you don't have to worry about it. Maybe it's different if you're running a proper desktop environment and not pure Openbox.

All in all I'm liking it, and it'll probably save me one day from accidentally erasing my hard drive ;)
Posted by Dan at 7:33 PM 2 comments

Email ThisBlogThis!Share to TwitterShare to FacebookShare to Pinterest
Labels: Linux, ROX-Filer, They Want You To Say ROX-Filer Rocks

I just noticed Debian Wheezy went stable a couple of days ago. I can't believe I missed all those wild and crazy release parties.
Posted by Dan at 9:58 PM 1 comments

Email ThisBlogThis!Share to TwitterShare to FacebookShare to Pinterest
Labels: I'm A Veteran Of The Sarge Release Parties And Have The Caked Vomit On My Shirt To Prove It
Newer Posts Older Posts Home
Subscribe to: Posts (Atom)