You may have noticed Twitter recently updated their mobile site when accessing it in TenFourFox. It used to look like this (old convo, don't know if anything came of it): 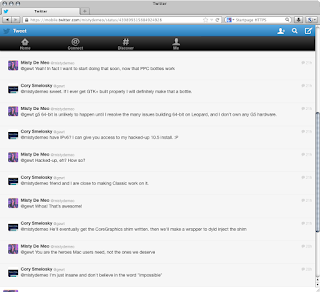 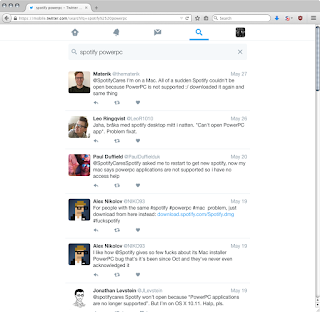 The problem, as with most website "upgrades," is it's slow as molasses. Gone is the zippiness. Instead, we get a mobile site that's almost as slow as the regular site. So I boxed mobile.twitter.com with FoxBox to see if it helped, and I found something interesting. I get a paired down, much faster version of Twitter: 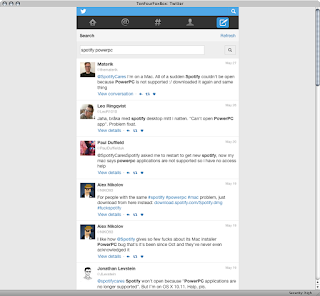 Then I went back to TenFourFox and used User Agent Switcher to change the user agent to an iPhone 3 and found the same paired-down site. Interesting, so it's a user agent issue. The iPhone 3 solution isn't wholly satisfactory as it breaks some other sites, but after some trial and error, I found that the user agent for TenFourFox 37 gives me the same stripped-down, fast Twitter, so apparently Twitter Mobile only gives you the new layout if your user agent is TenFourFox 38 or higher.

I wanted to change the user agent to v. 37 permanently so I wouldn't have to switch user agents back and forth between sites, but User Agent Switcher has a bug/feature where it reverts to the default version after closing a window. So I did it the manual way, which is to enter about:config in the address bar and press return, type useragent in the search field, right click on some white space and choose New --> String from the menu. Enter this for the preference name:

Then enter this for the string (no line breaks):

(UPDATE: I should add to revert to default, right-click on the preference and select "Reset".)

With this I'm all set, until sites warn me my version of Firefox is too old*, please update, etc., etc. Maybe by then there'll be some kind of site-specific user agent switching available, either built in or as an add-on. I'm sure Dr. Kaiser or somebody can whip that up on a lunch break, ha ha. (2ND UPDATE: this add-on is what I was looking for. Upon further review, this is too buggy.)

Anyway, this has been another episode of cling to PowerPC forever. I recently weighed my upgrade options, looking at a Mac Mini, a Macbook Air, and a Thinkpad, but I didn't find them appealing. With new Macs, I'd have to accept no Firewire, no Classic, no PowerPC support, not even Rosetta, and Apple's increasingly buggy software. With a Thinkpad and Linux, it'd be much the same.

*this may also interfere with add-ons auto updating until you update the version string to a version the add-on supports.
Posted by Dan at 10:27 PM 13 comments

Email ThisBlogThis!Share to TwitterShare to FacebookShare to Pinterest
Labels: I Feel Like I'm Not Getting The Full Twitter Experience, Someone Make Me The Object Of A Twitterghazi

Cool Mac Book in the Making

No, not MacBook, Mac book. As in someone's writing a book about gaming on the Mac called "The Secret History of Mac Gaming." As the title suggests, it's going to be a narrative-style retelling of the history of Mac game development and draws on all sorts of interviews with key players from the 68k era through the early 2000s. What could make this interesting is these were for the most part indie developers who followed their own muses and came up with some really creative UIs and gameplay, so I'm sure they have great stories to tell.

The author, Richard Moss, emailed me drawing my attention to this and has some serious credentials, having written for Ars Technica, Edge, Mac|Life and several gaming sites as well as producing a podcast, Ludiphilia. There's a crowdfunding site for both digital and deluxe print editions of the book which you can visit here. There's also a pitch video on Youtube. Both links will tell you a bit more about the project and how you can contribute, so I'd encourage you to check them out.