Ever since Olivia Munn made it famous, Skitch has been all the rage for annotating and drawing on pictures and screenshots. Recently, though, Tiger users got a nasty surprise when the beta version they were using expired and the upgrade required Leopard. No warning, really. Tiger users just woke up one day and found out it wasn't working. A Skitch rep left a download link to the expired version in their forums, but it's...still expired. Not sure what the thinking was there. Long story short, Skitch is dead on Tiger.

So I got to thinking alternatives. What are some applications that can do the same thing and still have Skitch's ease of use and simplicity? Unfortunately there isn't one that combines all its functionality (screen capture, annotating, and sharing) but there are a few simple steps you can do to somewhat recreate the Skitch experience.

Next, drawing. The easiest application I can think of to add drawing or text to an image is Seashore. It's based on GIMP but much more simplified. The shareware GraphicConverter would be a good choice here, too. With Seashore, there are two downloads available, one "stable," and the other a beta which is a major update with a single window interface. Although I'm partial to the old floating window interface, the beta has one important advantage in annotating text -- you can move the text before committing. With the older version, you had to click on a spot and hope it was exactly right. The only thing I don't like is how the interior of outlined text is transparent. If you want text that stands out clearly from the background, you need to add a new layer, add your outlined text, then use the paint can tool to fill the letters in with a different color. A bit time-consuming. 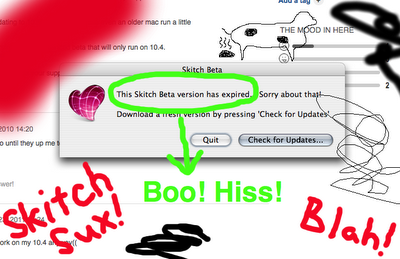 As for sharing, well, there are all sorts of ways. Heck, you could even have your iPhone hacked and have all your racy Skitch files released to the world;)
Posted by Dan at 11:07 AM 4 comments

UPDATE: The Minitube problem is actually a Gstreamer bug that prevents playback of some mp4s encoded with ffmpeg.

UPDATE 2: FlashVideoReplacer has ceased development and the developer has removed it from Firefox's add-on site. I subsequently wrote about another flash alternative, quvi, here, and some cross platform alternatives here.

Given that the Youtube player Minitube is somewhat broken in Debian Wheezy (about half the videos don't load), Linux PowerPC users may be interested to know there are some alternatives to Flash so you too won't be deprived of watching time-wasting Youtube videos day and night (this is not a confession).

Probably the best way is with the Iceweasel add-on FlashVideoReplacer. I've written about this add-on before for OS X, but the Linux version allows you to pass on videos to a standalone player, no flash or Quicktime plug-ins necessary. So you can have them stream in gnome-mplayer or xine or whatever, and you got Youtube videos on your desktop. Or if your CPU's too slow to be downloading and playing simultaneously, you can just use FlashVideoReplacer's download option and play the video afterward.

There's just one problem with that, though. FlashVideoReplacer only works on Mozilla browsers, so if you're using Midori (webkit) you're out of luck. Or are you? Turns out Midori can use some Greasemonkey scripts, one of which is Viewtube. You have to enable user add-ons in the extensions section of the preferences, then at userscripts.org go to the Viewtube page and click the install button. The next time you visit Youtube you'll see non-flash playback options just above the video frame.

There's also html 5, but on PowerPC I don't think you get any hardware acceleration so you probably need a G5 to get something playable. Also, a flash section at Ubuntu's PowerPC FAQ talks about Gnash and Lightspark and a few other suggestions like spoofing your browser's user agent to a mobile device.

h/t to the users at the MintPPC forums for providing much of this information.
Posted by Dan at 7:45 AM 9 comments

Email ThisBlogThis!Share to TwitterShare to FacebookShare to Pinterest
Labels: I Was Way Too Exhausted When Writing This So If I Forgot Anything Egregious Leave It In Comments

Add Security to Dropbox with TrueCrypt

UPDATE: This is probably the dumbest post I've ever written. As many people in comment sections of articles on this subject point out, this isn't %100 secure. And there are all sorts of complications with having synced volumes mounted on two computers simultaneously. So if you want privacy, just use Wuala or SpiderOak. (And I should stop linking to Lifehacker posts, not only for this, but because the other day they had a post that was supposed to give tips on how to survive with a laptop without a DVD drive, and when you open the article it just says basically to buy an external DVD drive. Gee, thanks.)

A couple weeks back I wrote about file syncing on PowerPC Macs and noted that Dropbox had one disadvantage compared to services like Wuala and SpiderOak, and that was security. By remotely storing your password on their servers, it implies that a Dropbox employee could hypothetically give your password to third parties like governments or copyright litigants. And security holes aren't just hypothetical. Awhile back, in a hilarious snafu of laughtastic proportions, all Dropbox accounts were open to anyone without password access one day for several hours. In fact, if you walk by a bar to this day and hear random laughter, that's probably Dropbox users still sharing a hearty laugh about it.

Well, if you've tried the other services and are still attached to Dropbox's simplicity/performance/Je ne sais quoi, you can still have your security and eat it, too. After stumbling on this Lifehacker post, I found out you can encrypt selected files within your Dropbox folder (or even your whole Dropbox folder) with TrueCrypt, a free and open source encryption program. And lookie here, both Dropbox and TrueCrypt still support Tiger PowerPC!

So how secure is TrueCrypt? It's been well established for years and gives you several different encryption schemes to choose from, and even the FBI was stymied in its efforts to crack it. So as a non-expert, that sounds pretty secure. The only caveat, if you're like those reviewers on Macupdate and flame every GUI that isn't sufficiently Mac-like, you'll probably have the same reaction with TrueCrypt because it's decidedly un-Mac-like. But it does the job and does it well.
Posted by Dan at 4:47 AM 0 comments

Email ThisBlogThis!Share to TwitterShare to FacebookShare to Pinterest
Labels: Dropbox, Or You Could Just Get A Moat And Crocodiles For Your Security Needs, TrueCrypt

In light of my previous post on an updated Transmission for Tiger users, I thought I'd put all in one post a collection of unofficial builds for applications that have officially left Leopard and Tiger behind but have had users step up and compile unofficial builds that run on those systems. Most have these have already appeared here in previous posts, but some are new.

Transmission 2.31 for Tiger can still be found on the 5th post of this thread (UPDATE: Download link in that thread is dead. Here's a new one.)

Filezilla, a full featured FTP client, has a page of Tiger builds here.

Handbrake 0.9.5 for Leopard PPC is here.

A universal binary for the racing simulator TORCS courtesy of Stephen Hudson is in my Mediafire folder. It's for v1.3.0 (the last official Mac build was for 1.2.4).

zDoom, an enhanced port of the original Doom, has Mac builds on this page. The latest stable release is 2.5.0 at the bottom. You need the original game files to play this as it's just an engine.

And of course there's TenFourFox and TenFourBird, though they might be considered forks rather than unofficial builds. And also there's Leopard-Webkit for those of you who want a webkit browser.
Posted by Dan at 1:35 AM 7 comments

Email ThisBlogThis!Share to TwitterShare to FacebookShare to Pinterest
Labels: Build Your Own, Handbrake, Songbird, TORCS, Transmission

(UPDATE: via the comments, a new version 2.84 is available at this link new link here)

I've been using Transmission for quite some time as my main bittorrent client, though the last version that supports Tiger is 1.54. However, via the MacRumors PowerPC Forum, I've found a user build of v2.31 for Tiger in this thread which supports magnet links, DHT, and UDP trackers.

I'm using it now and, though it's not a cocoa app and uses the Qt interface, I'm pleasantly surprised at the performance. It takes awhile to start up and doesn't support drag and drop, but other than that it performs the same as the old Transmission, using very little of cpu and memory resources. And it supports magnet links and DHT, two modern features that are becoming more and more essential.

The download is a universal binary, and though the first download in the thread is for 2.30b4, down thread a bit is 2.31 (direct download here is here). Happy bitting! Er, torrenting! Or whatever.
Posted by Dan at 1:37 AM 17 comments