Since animated gifs are the weapon of choice in spreading internet memes around the world and aren't going away anytime soon, there's no reason for us PowerPC users to be left out in the cold. There are several applications that make animated gifs on Windows and Intel-only versions of OS X, but finding applications that do the job on PowerPC, particularly making gifs from video clips, is more daunting. Thankfully there are a couple of open source, cross-platform tools that we can combine to grab the video and then export as gifs, namely avidemux and GIMP.

First, download and install avidemux. On Debian, it's available in the deb-multimedia repositories. On OS X, you can download version 2.4.4 which works on Tiger from SourceForge (your choice of QT4 or GTK versions). Then follow the instructions on HOW-TO: Make an animated gif for using avidemux to extract a clip from a video file, specifically using the "A" and "B" buttons and then saving the selection as jpeg images. Hopefully you created a folder for them because it'll output dozens or even hundreds of jpegs.

Next step is to install GIMP if you haven't. On Debian it's in the official repositories, and Tiger and Leopard versions can be downloaded from this site. Then follow the instructions again from the above HOW-TO, using Open As Layers, maybe opening one out of every three or four frames, then do all the cropping and resizing you want, and export as an animated gif.

And for viewing gifs outside a web browser, there's Xee on OS X and GPicView on Linux.

Here's a quick sample I made. Feel free to re-purpose:

Email ThisBlogThis!Share to TwitterShare to FacebookShare to Pinterest
Labels: GIF, JPEG, Life Is A Feedback Loop

Now Google's banishing my comments to the spam folder on my own blog.
Posted by Dan at 4:54 AM 3 comments

Email ThisBlogThis!Share to TwitterShare to FacebookShare to Pinterest
Labels: We Will Return To Regular Programming As Soon As I Restore The Feeling To My Head 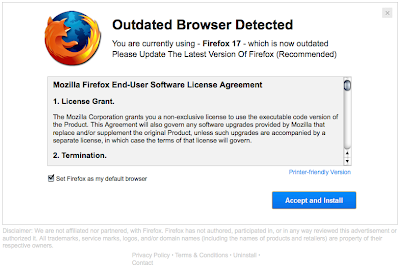 Some apps out there never seem to die. Their developers subsist on a near-lethal cocktail of cigarettes and Red Bull to keep burning the midnight oil so they can deliver new version after new, year after year. How long has Audacity been around? Or GraphicConverter?

However, some developers want off that train and they drop out. Understandable, but that doesn't mean their software has to die with their masochism, I mean, ambition. With that in mind, I thought I'd give a run-down of several software titles whose development has ceased but are still useful and very much not available in the App Store. Let's do this list style:

Cog - This was a music player that I tried out a few years ago in my never-ending quest to replace iTunes. I didn't stick with it because it lacked an equalizer, but now that I have a global equalizer it's no longer an issue and I'm iTunes-free. Cog also properly supports ogg and flac files and handles large libraries with ease.

FormulatePro - Want to edit pdf files but don't want Adobe products clogging up your computer? FormulatePro is a good lightweight tool for this. You can insert text, check marks, and also make use of simple drawing tools.

HimmelBar (link updated) - This is an application launcher that sits in your menubar. It looks for applications in common folders like Applications (duh!), Utilities, and Developer and puts them all in one menu for easy access.

Perian - Not an application, but a plugin for Quicktime Player, it lets you play many many many different video formats.

Play - Very similar to Cog, and people on their user forums observed that Play just sounded better than the competition.

Seashore - Photo editor inspired by GIMP but much more lightweight (and more modest in features). Supports layers and you can also save in GIMP's native xcf format, among others.

I'm sure there are many more for the graveyard, but just because the projects are dead doesn't mean we can't still put them to good use. And we can remember fondly when there was a vibrant freeware/shareware community for OS X before it was destroyed by the App Store. Cheers!
Posted by Dan at 12:55 AM 4 comments

What To Do With Your Old PowerPC Mac

In various forum threads and chest thrusting rituals, often the subject comes up, "What do I do with my old Mac?" There are the common answers like fileserver, iTunes server, even Bit Coin miner, but for this post I want to recommend an option I don't often see--Linux testing machine. As open source community projects, Linux distributions rely on the community (you) to test and file bug reports to ensure the optimum reliability of the project. And to be rewarded with a delectable spread of famous meats and cheeses (OK, maybe not).

Installing Jessie directly is simple enough, so let's illustrate how to upgrade from Wheezy. Once any kind of Wheezy is installed, it could be just a base system without a GUI, you need to edit your /etc/apt/sources.list file. You'll see several download mirrors with either "stable" or "wheezy" in them. To upgrade to Testing, replace every instance of "stable" or "wheezy" with either "testing" or "jessie". If you want your system to stick with Jessie after it turns stable, use "jessie", but if you want to stay permanently on a Testing rolling release, use "testing".

Note here, Wheezy installs should list an additional wheezy-updates repository (not to be confused with the security "wheezy/updates" one), but there's no such thing as jessie-updates. Instead, as of right now, it's jessie-proposed-updates, so replace with that. To see which repositories are actually available for your release, enter your mirror's url in a browser (http://ftp.us.debian.org/debian in my case) and click on dists. Peter S. reported problems with this, so I think it's wrong. Just comment out the "wheezy-updates" lines (not "wheezy/updates" in the security urls) and leave it at that.

Once you got all that worked out, save and exit and run the following command to update your repositories:

Then to actually upgrade your system, run:

and your kernel and all packages will be upgraded to Testing.

The procedure to upgrade to Sid is basically the same, but Sid doesn't get any security updates or sid-updates, so comment out those lines (if you don't know what "comment out" means without googling, you probably shouldn't be running Sid). Then replace "wheezy" or "jessie", whichever you installed from, with "sid" or "unstable". Then run the two commands above and your computer will explode, I mean, you'll be all set.

From then on, you can install software and report any bugs you find with Debian's reportbug program. It comes in both command line and GUI versions and includes onscreen instructions to walk you through the process. So say if you upgrade to Jessie and suddenly your sound won't work, you can report a bug against alsa-base and say "My system isn't loading the snd-powermac module. What the eff?" Or something like that.

So put those old 'Books and Power Macs to work and make those packages maintainers roll their eyes at looking up Big Endian/Little Endian problems.
Posted by Dan at 1:28 AM 4 comments