How I Use Linux

What's with all the hostility to Linux on PowerPC? If you've read certain forums or blogs you've probably come across it. Not just, "Linux isn't for me," but attacking Linux as bad for everyone and warning people not to do it. Among those attacks are common complaints like there's no flash, the UI is boring, the hardware is unsupported, etc. First, flash's performance sucks. You can get way more mileage streaming through Mplayer or VLC. Second, the UI is whatever you choose. And third, I don't remember the worldwide sturm und drang when people put out HowTos on how to install Tiger on unsupported hardware with XPostFacto or Leopard with LeopardAssist.

The fact is Linux is not OS X. And OS X is not Linux. One does some things better than the other and vice versa. I run a mixed environment. I have a desktop that primarily runs OS X and a laptop that primarily runs Debian Linux. So I thought I'd compare the two and show you the ways which Linux has helped me.

On OS X my most used applications are TenFourFox, iText Express, iTunes, Mplayer, MacTubes, and Transmission (it's always on in the background. I'm on a private tracker). Incidentally, all of those applications have identical or very-close-to-it counterparts on Linux. I also commonly use Cyberduck, ToyViewer, GIMP, SABnzbd, TenFourKit, and GarageBand. But sometimes it's not enough. One limitation I have is I don't have a widescreen monitor, so it's difficult to play video and do other work simultaneously. That's where my Linux laptop comes in. I use it for streaming media, Youtube, etc., and it has its own dedicated processor so my desktop's doesn't get bogged down playing a webisode of The Guild. It also has Pithos, which is unavailable for OS X, that streams Pandora radio.

Another thing I turn to Linux for is LibreOffice. LibreOffice on OS X is too dog slow (and the Tiger version has monospace font issues Bug fixed), but on Linux it feels almost like a lightweight word processor.

Lately I've been getting my feet wet with music production and trying software synths like Yoshimi and Phasex, and sequencers like LMMS and Qtractor. Some Linux DAWs and synths are more polished than others, but the range of choice is amazing. And as far as music playback goes, I love Audacious's xmms interface and hate that there's nothing like it on OS X.

My point is, nobody who says Linux will be bad for you is making a definitive statement, 'cause I'm right here and Linux for me is working nicely. Here are a few screenshots taken with Shutter (a Linux Skitch replacement now that Evernote has destroyed the original). I find the dark theme much easier on my eyes. 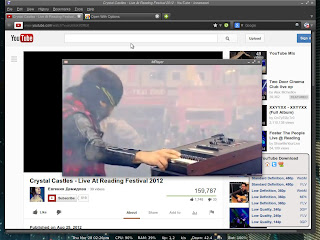 I had to use -vo x11 to capture the Mplayer video, 'cause with the xv default it showed up as a transparent window. 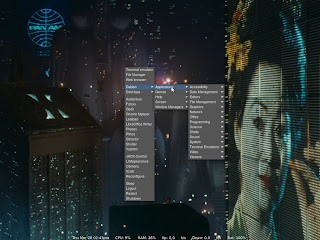 Email ThisBlogThis!Share to TwitterShare to FacebookShare to Pinterest
Labels: Did I Say How Much I Hate Evernote?, Linux, Soapbox

Peter S. emailed me a Youtube link that I found somewhat interesting.

Basically this person's suggesting he's going to start an ArchLinux port for PowerPC, sort of take over the project from where it was abandoned a couple of years ago. I don't know if this will come to fruition as it's a ton of work, but the author has been posting videos regularly so we'll see.

In the meantime, if you want a rolling release, which is what ArchLinux is (a release where the latest packages are updated as they come in), you can run Debian Sid and also pick packages from the experimental branch. You may be able to do something similar on Ubuntu, but I'm not sure. The thing about a rolling release, though, is that things can break. There isn't a lot of testing done before packages are allowed into the repository, and this is why rolling releases are geared to the more adventurous. But I've never used Arch, so it would be interesting to see the stability of their bleeding-edgeness vs. that of a traditional release-based distribution.

In other news, there's been some chatter on Linux blogs lately about Ubuntu's future plans (Mir, release schedules) and how they might affect the Xubuntu and Lubuntus of the world. There's thus far baseless speculation that the other flavors might jump ship and base themselves on Debian or some other distribution, but on the Lubuntu mailing list Lubuntu's lead developer withheld their opinion but said they'd have more to say when work is done on the current development release. So stay tuned.

I wonder how long Canonical can keep up its secrecy and arbitrary decision-making before people decide it's not a community worth contributing to anymore.
Posted by Dan at 3:41 PM 2 comments

Don't ask me how I got this (I don't want to be responsible for any drone strikes), but I have a prototype of Apple's upcoming iOS 7.  This has been hotly anticipated, partly because people were getting fed up with the staleness of iOS 6, and also this is our first chance to see Jony Ive's fingerprints since he took over as head of design. 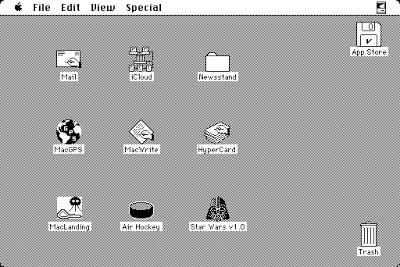 Gone is the schizophrenic skeuomorphic implementation of previous releases in favor of a much simpler, more unified design.  Instead of switching from metal to leather to blue jeans, your eyes will be now be focused on one texture, with all icons and graphics following the same graphical framework.  But that's just the visual.  The real innovation here is with two brand new technologies called "MultiFinder" and "Hypercard." 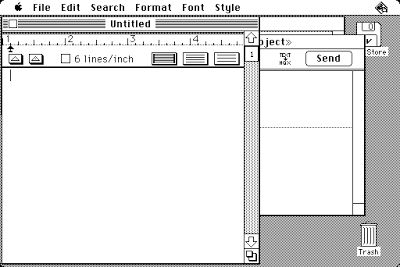 MultiFinder, simply put, brings the new ability to run apps side by side in an interactive manner.  I almost don't know what to say about this.  It's so new I think we'll need some time to process all the implications.  It's one thing to have apps, but to have multiple apps working together at the same time?  My head is officially blown.

Hypercard is something I haven't had time to get much into yet, but it's supposedly an intuitive programming interface that will allow any ordinary Joe or Josephine to produce their own apps, no programming language necessary.  This is nothing less than the democratization of software development and could be a revolution in how we interact with our devices.  One can even imagine people eschewing current media models and producing their own communication networks.  Imagine if we had something like this twenty-five years ago.  The World Wide Web would be a far different place. 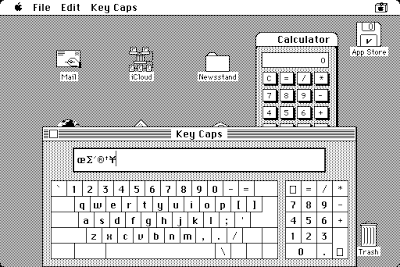 Other additions are a built-in calculator (finally!) and something that makes my fingers particularly happy, an extended keyboard.  I should apologize for not going more in depth, but I just got this and I'm literally trembling with the adrenaline rush as I write it.  Hopefully I'll have more, though I'm sure Gizmodo will chime in.  They're never far behind on this stuff.  But, yeah, the world's changing.  Thank you, Apple.  Just thank you.
Posted by Dan at 12:06 AM 11 comments 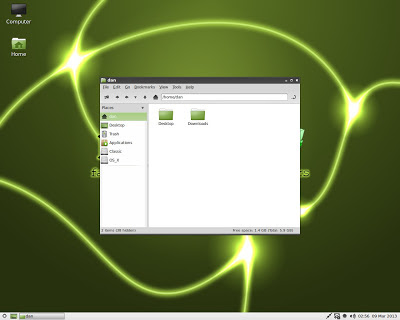 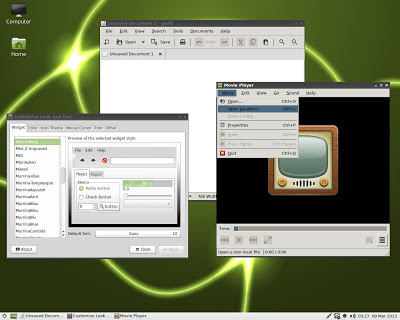 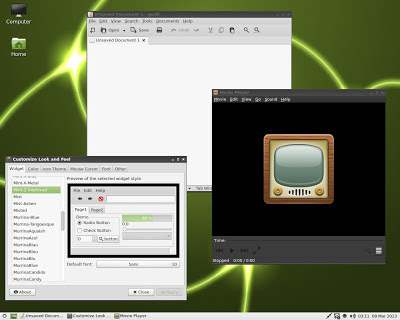 UPDATE: I should add that my install came with pulseaudio, which can cause problems if you're trying to use a JACK audio server, among other things. So you might want to uninstall pulseaudio.
Posted by Dan at 6:08 AM 10 comments