Lude Smuggler Will Not Be Suppressed

So I was perusing through Macintosh Garden in the arcade section, taking a trip down memory lane, when I noticed something not quite right. They had MacLanding and Missile Command and even its awesome clone, Ground Zero™, but still, something was missing. Lude Smuggler!

Lude Smuggler, for the uninitiated, was a re-skin of Lode Runner, which for a time was the addictive game de jour before Tetris and Cranky Birds or whatever. The object of Lode Runner was to dodge a bunch of enemies while collecting bags of gold and escaping to the next level. Lude Smuggler was the same, but instead of bags of gold, they're supposed to be bags of ludes.

Can this be? Can there be literally no record of Lude Smuggler on the entire World Wide Web? No, no, no, no, no. This cannot stand. I know the drug war is taken to ridiculous extremes, but this is going too far. I knew I had Lude Smuggler on some hard drive somewhere, or at least on a floppy, so I became determined to retrieve it and upload it to the hallowed halls of the 'Garden.

So I got out my Power Mac 7100, which was my only Mac with a still-working high-density floppy drive, and hooked up my LCD monitor (with like a thousand adapters) and fired it up. Still works! And it turns out I did have Lude Smuggler on a floppy. Great! Now I just need to network it to my PowerBook and I can upload it from there.

(Author's note: Okay, I wrote about 800 words here about everything I had to do to get it to my Powerbook, but I'm cutting it because, frankly, it makes me sound crazy. Tl;dr version: it was a bitch.)

So finally Lude Smuggler is re-introduced to the masses. You can download it at its hopefully permanent home at Macintosh Garden and be smuggling ludes like a pro in no time. Here's the icon which my young impressionable mind would forever associate with "greasy":

And here's a screenshot: 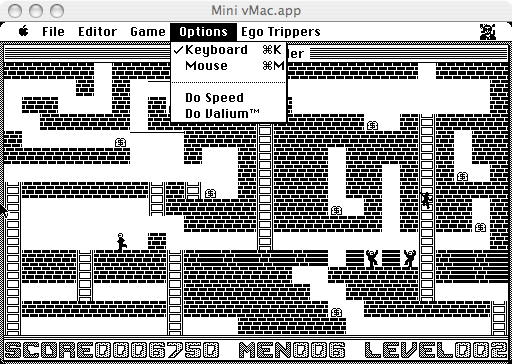 A New Notebook for PowerPC?

Roberto Innocenti emails me that he's started a project to deliver a new PowerPC notebook in the DIY tradition of the Novena Project and the pi-top, only significantly more powerful. Apparently he intends to team up with an Italian motherboard producer and will present his project plans at Linux Day 2014 in Milan. According to Mobile Linux News, the laptop will feature upgradeable components such as the video card, RAM, and SDD/HDD. It will also be 64-bit with altivec and multi-threaded capabilities, and will fully support gnu/linux as well as OS X virtualization.

You can follow along with the project's news at PowerPC-Notebook.org. Needless to say, if this became a reality you could knock me over with a feather, but stranger things have happened. Like Apple switching to Intel. ;)
Posted by Dan at 3:23 PM 3 comments

Mac OS 9 is a Lightning Rod

Apparently debating the merits of Mac OS 9 is very 2014. Via TenFourFox Development, all the hubbub was kicked off by an Ars Technica article* about living with OS 9.2.2 for a few days, which was followed with a rebuttal from Riccardo Mori at his blog. Some previous points of view on the subject are from The Vintage Mac Museum and LowEndMac, but I wanted to use this as an excuse to point to a Mac OS 9 Lives Forum thread which reveals how to boot OS 9 on MDD FW800 Power Macs.

(UPDATE: This note was left in the comments: Flashing the G4 FW800 MDD is no longer needed and it is not the preferred approach, we now have a Bootable 9.2.2 Install CD (with Modified ROM 10.2.1) that will boot unsupported G4s and Install 9.2.2. You can get the CD ISO image at www.macos9lives.com/smforum or at www.thinkclassic.org)

First sold in 2003, the FW800 models were the first Power Macs, and only G4 Power Macs, to not boot OS 9. This remained the case till over a decade later when this Mac OS 9 Lives thread, "Downgrade firmware of FW800 for OS9 comp", appeared. The whole thread is incredibly long (these were a dedicated, persistent bunch), but I'll just point to this post which has the actual solution. Basically it involves flashing the firmware with an older version that supports booting into OS 9. This works for the FW800s because the earlier firmware is for a very similar MDD model.

Efforts are also underway to duplicate this approach with other Macs, and the thread, "Mac Os 9 boot on unsupported iMac G4", reports limited success. Perhaps this won't work so well on other models because the only available firmware downgrades are too old and for too dissimilar hardware. It sure would be nice seeing an aluminum PowerBook booting OS 9, though.

As far as I read, the only limitations on the MDD are the disabling of the Firewire 400 ports in OS 9 and the Firewire 800 port running only at 400 speed, also only in OS 9. In OS X everything works fine. But for that, you get an OS 9 booting machine for your FW800, and now you too can join the online Mac OS 9 wars! Small price to pay for having access to all that great audio, productivity, and gaming software from the '90s-'00s.

*WARNING: That Ars Technica article is like weaponized banality.
Posted by Dan at 3:44 PM 8 comments