Sync Folders On Your LAN with BitTorrent Sync

There's a new syncing service and this one's a little different. Have you ever just wanted to sync your folders without involving the cloud? Here's your chance with BitTorrent Sync. As the name suggests, it uses BitTorrent technology to sync any folder across all your PCs and NAS devices on your home network. The only caveat is you need the client running on both computers, and the OS X version requires Snow Leopard, so Tiger and Leopard users are out of luck. So why is this appearing on a PowerPC blog? Because incredibly BitTorrent Labs compiled a PowerPC version for their Linux client. I've used it to sync folders on a MintPPC desktop and a Debian laptop, and though it's still in alpha and doesn't have many advanced features, it worked flawlessly.

Here's how to get it going. First, download the correct version (Linux PowerPC for your PowerPC Macs) and extract it to any directory in your home folder. Then either use your file manager to open that directory in a terminal, or in a terminal type the command cd path to directory holding the btsync binary. Then get the btsync daemon running by entering ./btsync.

Nothing happened. That's 'cause you have to use the web interface, silly! So get your IP address with sudo ifconfig (among other methods), fire up a web browser and go to yourIPaddress:8888/gui. In my case:

Next you should see the web interface where you can click Add Folder. Type the path to it, /home/yourusername/whatever, and then click the generate secret button. You will enter that secret into your other computer to sync to that folder. So do the same thing on your other computer. Extract the binary, startup the daemon, bring up the GUI, and add a folder to sync, this time entering the secret from your other computer into the Secret field instead of generating a new one. Now the syncing should start--Snow Leopard users may see a delay of up to ten minutes which BitTorrent Labs implies is strictly the fault of Snow Leopard ;)

I got pretty much full speed out of my wireless connection, though I haven't tested it over ethernet so I'll defer comment. Also, in their Get Started guide, they mention disabling the "Delete files to Sync trash" option means your deleted files will instead go to your system's trash folder, but on my system they just disappeared. So be mindful of that. Also there's no versioning yet, but I'd expect that in the near future. But overall, pretty cool stuff.
Posted by Dan at 4:24 PM 13 comments

Email ThisBlogThis!Share to TwitterShare to FacebookShare to Pinterest
Labels: Alpha, Bittorrent, Linux, OS X Lonely Off To The Side Sadface

A few posts ago I mentioned Linux software synths and the wide range of choices on that platform. The unsaid implication was that choices on OS X PowerPC suck by comparison, but that's not totally true. So I thought I'd point out a few software synths freely available on Tiger to get your inner musician musicianing.

Of course, pro DAWs like Logic come with their own synths, but if you're looking to get your feet wet, these plugins should keep you occupied. And they're all AU plugins, not standalone synths, so they'll work in an AU plugin host like GarageBand.

First is Automat. It's a three oscillator synth with an easy to use interface, a few dozen presets, and a great randomizer button to produce sounds you'd never think of yourself (mostly for good reason). This looks good for a beginner, though that doesn't necessarily mean you'll outgrow it. 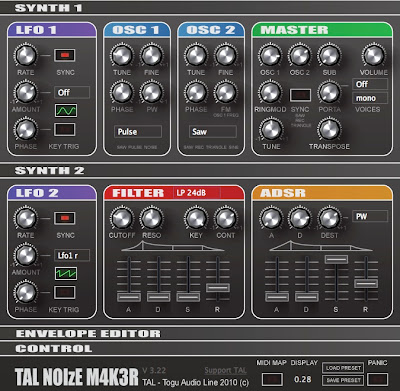 Next is TAL-Noisemaker. Its sound is "fat and full" and especially good for baselines and also for arcade sounds. Its GUI is a bit CPU intensive, but it comes with a couple hundred presets and plenty of filters. Download the .component.zip 32bit version. 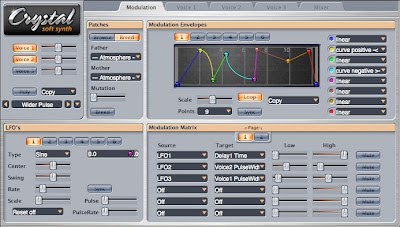 Finally there's Crystal. I had a hard time finding a version 2.4.9 that would run on Tiger, but I finally did here (there's also a CNET download link that says it's 2.4.9, but it's actually 2.5.1 which requires Leopard). Crystal is more complex than the previous two. It's got a manual I'll need to study, but it's been around forever and many people swear by it (not at it).

And finally I'll leave you with this video telling you everything you need to know to make electronic music:

How To Make Electronic Music Tutorial BY DJ NICO MALO

"Minimal effort and no talent." This man is my god.
Posted by Dan at 3:23 AM 2 comments

So I made my first mp3 purchase on Amazon. I got an EP that wasn't available on physical media (I'm a CD luddite, too), and it turns out in order to download all the tracks at once you need to install Amazon's mp3 downloader. Of course it doesn't work on PowerPC, but you can still download the tracks one at a time by clicking on "Skip installation" where the popup prompts you to install the downloader.

These downloaders that import your music for you are just another pillar in the conspiracy by distributors to get you to forget there's such a thing as a file system and files that you, you know, own. But I'm not paranoid.
Posted by Dan at 4:04 PM 4 comments

We Interrupt Our Programming...

Several times recently I've left comments on blogspot blogs that either never showed up or disappeared soon after posting. I can see two possibilities. First, my commenting style is so rancid that every blogspot blog admin deleted my comments without exception. Or second, my comments are getting sucked into Blogger's spam folder, as has happened to several of my commenters including one who goes by the name commenter.

If anyone has any ideas on how I can get off whatever s___ list google put me on, feel free to leave it in the comments. I'll double check my spam folder to make sure yours doesn't get sucked in there, too.
Posted by Dan at 11:06 PM 16 comments

Email ThisBlogThis!Share to TwitterShare to FacebookShare to Pinterest
Labels: Google Is Tapping Into The Super Massive Black Hole At The Center Of Our Galaxy To Power Its Spam Folder, Oh My God We're All Gonna Die
Newer Posts Older Posts Home
Subscribe to: Posts (Atom)