I tried to like Abiword. Really, I gave it the old college try, but in the end I had to admit I...what's the phrase I'm groping for...utterly despise it. It's onscreen font rendering, especially monospace fonts, is terrible. Formatting large documents often caused freezes. And despite being the "lightweight" alternative to LibreOffice, it felt slow and clunky like it was ported from somewhere else, not a native Linux application. Which brings me to one of the tangential subjects of this post--the dearth of word processors on Linux.

On OS X there are the big ones, Microsoft Office, LibreOffice, Pages, etc., and there are also several lighter alternatives like Bean and iText Express, to name two. However, on Linux there's basically LibreOffice, Calligra (KOffice), and Abiword. There used to be TED, which was a lightweight RTF editor, but after being unmaintained for years it was dropped from Debian's repositories. There was just recently an update, though, but Debian hasn't reintroduced it due to the author's lack of clarity on licensing issues. I decided to waste fifteen minutes of my life compiling it only to get errors, and sure enough, it exited with errors. So here I was basically left with LibreOffice as my only fallback. Thankfully LibreOffice is a much different (and better) performer on Linux than on OS X, and I've found I can use it for actual composing and not just formatting after the fact.

Usually in OS X when I write something, I use iText Express for the actual writing and then switch to LibreOffice or a dated Microsoft Word if I need to perform advanced formatting. LibreOffice on Tiger is just too slow to actually write on. Writer uses about 130-140 MB of RAM and also has a few display bugs in monospace fonts. Em-dashes typed as "--" are displayed as "—" in Courier, though when you save and open it in another word processor, it will show the correct "--". Also, Courier and Monaco have a spacing problem with "f" followed by "i" detailed in this bug report (UPDATE: These bugs have been fixed). And it suffers from the same slight font blur I talked about in this post on OpenOffice Aqua. Not to totally slag LibreOffice. It still supports Tiger PowerPC and still works despite the quirks.

On Linux, though, LibreOffice is much snappier. Despite being on the same PowerPC hardware, Writer uses about 90-100 MB of RAM and has fast scrolling and selecting of text, none of the clunkiness seen on OS X. Also none of the font problems I mentioned above. This is something I can actually compose on. Just make sure to install it alongside the libreoffice-gtk package for GTK integration. It's a bit similar to Mozilla products, where Mozilla applications have always been more lightweight and snappier on Linux than on OS X on the same PowerPC hardware. Cool!

I still don't get the Abiword thing. It's pretty much universally praised elsewhere, so maybe it's a PowerPC thing. Also, if you're looking for one of those WriteRoom clones for Linux, FocusWriter is good. It's not strictly a word processor as it lacks page margins and a ruler, but it has basic rich text formatting like bold and italics. Overall it's a great tool for getting writing done.
Posted by Dan at 7:45 PM 5 comments

Email ThisBlogThis!Share to TwitterShare to FacebookShare to Pinterest
Labels: It's Like They Looked At The ClarisWorks Template And Said Let's Spend The Next Ten Years Messing That Up

Some Ogg Vorbis Tools for Your Mac

When it came time to choose a format to encode my audio CDs with, I could have set up my own double-blind testing regimen and carefully tabulated the results in a spreadsheet, but the good folks at Hydrogen Audio already did that so why reinvent the wheel? Their conclusion was that Ogg Vorbis offered the best sound for lossy formats, better than MP3 LAME, so that's what I went with.

Obviously Linux comes with support for encoding and playing .ogg files out of the box, but on OS X you have to download a couple of tools first. To play .ogg files in iTunes, download Xiph.org's Quicktime Components (also, check out their FAQ for info on using it with 64-bit Macs). Afterward, you may notice your .ogg files are out of order when added to your playlist. To fix this, download Rescan QuickTime metadata 2.scpt.zip (the second one on the list)* from this page, unpack it, and add it to your home/Library/iTunes/Scripts folder (UPDATE: this script works in iTunes 7, but not 9, I didn't try it with 8). When you restart iTunes you'll notice the item "Rescan QuickTime metadata 2" in the scripts menu. Next, just highlight the songs you want fixed, choose the script from the menu, and your songs will magically be re-arranged in the correct order.

For encoding .ogg files, I'd been using Max for awhile, but recently it failed to look up a CD's metadata. Maybe the MusicBrainz server was down, but since Max was getting long in the tooth (last update 3+ years ago), I went looking for something newer. I went straight to X Lossless Decoder and saw their latest update (10/27/12) still supports Tiger PowerPC. Cool!

(UPDATE: I found a bug where embedding cover images in Ogg Vorbis files makes about half the files play only silence. My simple workaround for now is to disable embedding cover art in the preferences. I'll file a bug report and see what the maintainer says.) The Xiph plugin and my version of VLC were old and don't support METADATA_BLOCK_PICTURE. Newer decoders work fine.

One thing about encoding in the program, by default it dumps all the files into the parent music folder you choose in the preferences. However, if you want to organize your files in separate /Artist/Album folders, you need to go to "Format of filename" in the General preferences and add "%A/%T/%n - %t" to the text field. The forward slashes will create folders. 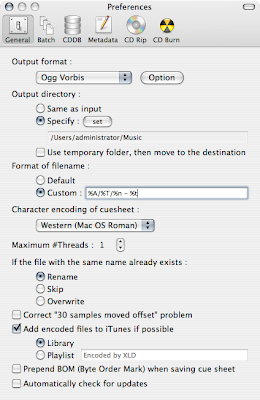 And for playing .ogg files on an iPod? Rockbox will let you do that, though it's not yet compatible with all models. And if you have something newer like an iPhone or iPad, ditch it and get an Android device that isn't crippled out of the box ;)

*Also, this page has an iTunes script that combines the metadata rescan with ReplayGain, though ReplayGain requires vorbis-tools be installed "(e.g. through Fink)."
Posted by Dan at 8:23 PM 2 comments

Email ThisBlogThis!Share to TwitterShare to FacebookShare to Pinterest
Labels: Can You Hear Me Now?, No Because You're Using A Toy That Doesn't Support All Standard Formats, Now Go Back To Sucking On Your IPhone And Stop Bugging Me

If all else fails, there's the cloud. But if you want something faster, say a home network and you have a mixed environment with Tiger, Lion, OS 9, and Linux Macs to share files on, you have several options to play with.

If you don't mind rebooting and need to move large files quickly, Target Disk Mode is a good option. Target Disk Mode works on any Mac with native firewire. Just start up holding the "t" key, attach it to another Mac via firewire, and it will automount as an external hard drive on Macs running Mac OS 8.6 or later, and on any recent Linux distribution, too.

Another option is AFP (Apple Filing Protocol). This is the "Personal File Sharing" option in OS X's Sharing preferences. After Tiger it was changed to just "File Sharing," which is also the name of the corresponding control panel in OS 9. In Linux, you need to install the Netatalk package for AFP client and server capabilities, no post-install configuration necessary unless you want to do something fancy;)

For sharing between OS X machines, just activate the File Sharing option on the server side, then on the other Mac choose "Connect to Server..." from the Finder's Go menu, enter its router IP address (afp://xxx.xxx.x.xxx), followed by the server machine's administrator name and password. To connect a Linux machine, go to the network folder in your file manager and where you see your host's network icon, double click it and enter name and password. If you don't see the icon you can also enter the IP address in the text field.

When adding OS 9 to the mix, there are a few caveats. Apple has been deprecating legacy Appleshare and Apple Talk services like crazy, so a lot of the older stuff doesn't "just work." I can say that I can network with Tiger and Linux hosts using the Network Browser application in OS 9. And when using OS 9 as a server, make sure the TCP/IP box is checked in OS 9's File Sharing control panel. With Snow Leopard, I could only connect to an OS 9 server, not the other way around. It may take some trial and error to figure out what works on your setup, especially if you have Snow Leopard and up, but I'll leave you some links:

This System 7 Today link shows how to network System 7 and Leopard.

A 68k Macintosh Liberation Army thread goes through a lot about Lion and old Macs, and down thread has a hack to replace Lion's AppleFileServer.app with Leopard's to enable connecting with OS 9.

(UPDATE: And here's probably the most useful link of all, a very comprehensive post on Mac networking, including a handy chart showing your networking options depending on what Mac OS version you're on.)

There's also SSH and SFTP (SSH File Transfer Protocol). The server side is activated in OS X with the Remote Login option in the Sharing preferences. Linux systems usually have the client and server software automatically installed with the openssh-client and openssh-server packages. As far as clients go, Cyberduck is a great SFTP client for OS X (3.2.1 for Tiger available in their changelog section). There's Filezilla or bareFTP for Linux, or you can even connect through a file manager. And there's an OS 9 SSH client called Nifty Telnet SSH.

There's also ftp, but that's too boring to write about, har. And if you're transfering files from OS 9, check out my post about resource forks.
Posted by Dan at 6:00 PM 2 comments