(UPDATE: A lot of this is outdated. Mplayer doesn't work with the https links Youtube now throws up, so for OS X I'd recommend PPC Media Center, and on Linux you can use Mpv with the following bash script:

Save it in a text editor as something.sh and make it executable with "chmod u+x /the/path/to/something.sh". The script requires Mpv, Youtube-dl, and xsel, and when you copy a video URL to the clipboard launching the script will stream the video. END UPDATE)

Put that in a #!/bin/bash script and you can just copy the video URL to clipboard and launch. This is assuming you have mpv, youtube-dl, and xsel all installed. END UPDATE)

By now you probably know about MacTubes for OS X, and I've written about quvi on Linux, but I think it's worthwhile to go through a few other Flash/Youtube alternatives given the way Google likes to break third party apps by changing its URL paths. Also, MacTubes hasn't been updated in quite awhile and has difficulty on videos with embedded ads, so who knows how long before it completely breaks? We need workarounds that have a history of rapid updates, and that's what this post is about.

Like the title says, the three alternatives I've found are cross-platform. One's a python script, and the other two are Greasemonkey scripts that work in Firefox/Iceweasel/TenFourFox.

We're also going to be using Mplayer from the shell to stream the video. You could just as easily use VLC or the new Mplayer fork, Mpv, but since I primarily use Mplayer I'll focus on that.

On Linux you can install Mplayer with your package manager, unless you're on a G3, in which case you have to compile it with the configuration option --disable-altivec (Mpv doesn't have this complication, but it's not yet available in Debian Stable). OS X users can use Macports or Tigerbrew to install Mplayer, or you can find an older pre-compiled binary inside the application package distributed at MPlayer for MacOS X.

Now to the best command line arguments for streaming Youtube, which are:

Those arguments will prevent the picture from lagging the audio, though if you have a slower computer and lagging is still a problem, you can add the argument -lavdopts skiploopfilter=all on h.264 files. Note that last argument will slightly degrade picture quality.

Next, OS X users will want to copy and paste B-G's Mplayer scripts. They're easy to edit if you need to change Mplayer's path or add arguments, and you can save them in your ~/Library/Scripts folder so you won't have to open a terminal to start a vid. As you can see from my scripts menu (enabled in AppleScript Utility), I've created way too many for every conceivable scenario: 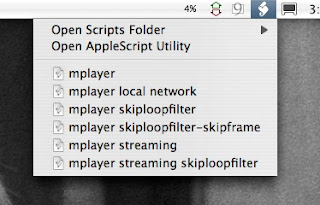 On Linux we'll set up quick video launching with a bash script. First, install "xsel" with aptitude/apt-get. Then create a text file and paste the following (no carriage returns on the second line):

Save it as toob.sh and make it executable with chmod +x path to toob.sh. Don't worry, that script will all make sense in a minute.

Now that Mplayer is set up, let's switch to the video downloader youtube-dl. It's a python script that requires Python 2.6, 2.7, or 3.3. Tiger and Leopard came with 2.3 and 2.5 respectively, so you'll have to update. Python 2.7 works great for me on Tiger. Next, Linux and OS X users can follow the instructions on youtube-dl's download page to install (if curl or wget mysteriously won't work on your OS X system, you can also paste the download URL in your address bar and save the file). Once it's in your /usr/local/bin and made executable, run youtube-dl -U to update to the newest version.

Ordinarily youtube-dl is used to download videos to disk, but for streaming we'll use it to retrieve the video link only. Not the page URL, but the long URL to the actual video. Before we get to the shortcuts, let's do this from the command line to see it all under the hood. In a terminal, enter (on one line):

The -g option outputs the video link only, -f 18 specifies the format of the vid, in this case 360p mp4 (with no arguments it defaults to the highest resolution, and -F outputs all available formats). The --prefer-insecure is a new option to deal with Youtube throwing up https links, which Mplayer doesn't handle (Mpv, however, does). Now you'll notice the output is a really long link. That's the link to your video! So to get Mplayer to play it, you enter in a terminal (on one line):

and to retrieve the link and play, all in one command, enter (on one line):

Some people say you need those cookies options on some rare videos, so that's why I'm including them. Otherwise, they're harmless.

Now to the shortcuts. In OS X, copying the long link from the youtube-dl output and choosing B-G's streaming script from your AppleScript menu will play the video. Alternately, you can "Save As..." in Terminal.app, and where it says "Execute this command (specify complete path)" enter:

and check "Execute command in a shell". Now when you copy a Youtube page URL to clipboard, choose the command from the File | Library submenu in Terminal.app and the video will play.

On Linux it's even easier. Just copy the Youtube page URL to clipboard and launch that bash script I showed you above. Your video will now play.

So that's one Flash alternative, but I mentioned there were two others. These two are Greasemonkey scripts for Firefox/Iceweasel/TenFourFox, so first install Greasemonkey. Then install the user script Youtube EZ Download. Now when you go to a Youtube page you'll see a box on the lower right corner with a list of download links: 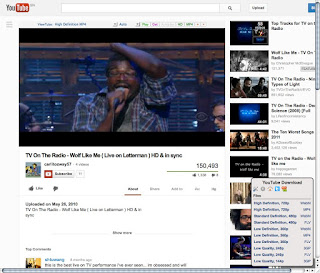 In OS X, copy a link to the clipboard, then choose B-G's streaming script from the AppleScript menu and watch the video. In Linux, use the Firefox add-on Open With to create a new menu item for Mplayer and its args. Then right-click a link in the Youtube EZ Download box and choose "Open Link with Mplayer". 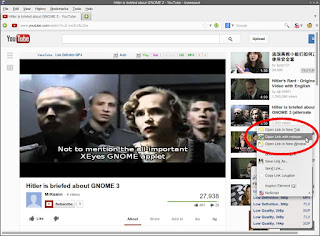 The other Greasemonkey script has been around awhile and is called Viewtube (also in the screenshots). It replaces Youtube's video player with a picture preview and several buttons for playback and downloading. You can use the Play function to play back videos with the gecko-mediaplayer browser plugin and gnome-mplayer, but that's not cross-platform to OS X. OS X users will still find it useful as the Get button works for downloading, and it replaces Youtube's CPU eating no-flash warning with the aforementioned picture preview. It also works with Youtube's Feather Beta.

So there you have it. Streaming Youtube through Mplayer with just a couple of clicks. Also, youtube-dl and these two Greasemonkey scripts have a history of frequent updates so any of Google's periodic breakages shouldn't last long.

I found a couple of other Youtube browsers I didn't try. One was yt, a command line browser, but it didn't have thumbnails so it wasn't for me. Also, there's gtk-youtube-viewer (bottom of page), but I didn't see any documentation about compiling on Debian, and knowing my compiling skills...

Thanks to Peter S. for telling me about youtube-dl :)

UPDATE: There's some good stuff in the comments, too, about UnPlug and more AppleScripts. Read on!

So you can adjust all the above commands by pointing to the binary in the VLC app package.
Posted by Dan at 6:48 AM

Email ThisBlogThis!Share to TwitterShare to FacebookShare to Pinterest
Labels: Blogger Wants Me To Add A Label After All This?