For most of my music playing needs in Linux, I've relied on Audacious. It's a perfectly solid player that has the advantage of using relatively little memory. In a world where almost every Linux application is described as "lightweight," it's actually lightweight. But it lacks a few advanced features, most notably iPod support. Here's where Banshee comes in. Banshee is an advanced music player if you're looking to replace iTunes that has a similar and attractive feature set. 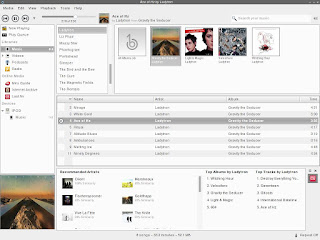 As you can see from the screenshot above, it has pre-installed plugins for downloading album art and iPod support and has an interface instantly familiar to anyone who's used iTunes. It also has a context pane you can pop up which shows links to similar artists. In syncing an iPod, I found you have to mount it manually in a file manager, if your desktop doesn't automount, before it'll appear in Banshee. But otherwise syncing works as expected. I also tried syncing an iPad running iOS 5 from the instructions on this page and some troubleshooting advice here, but it didn't work. Though I could mount the iPad in a file manager, it's appearance in Banshee was purely decorative;)

Banshee is built on the Mono framework, so it's not native GTK, but I didn't notice any speed deficiencies. It'll use about 60 MB of RAM, so it's not lightweight like Audacious, but the extra features are impressive. The only issue I had was enabling the equalizer gave me stability problems, but an equalizer isn't a big deal to me.

Rhythmbox and Exaile are similar players, but I found them lacking in a few ways. Rhythmbox is a little too simplistic and hard to configure. Album art fetching doesn't work out of the box and Google tells me it would take some effort to get it running. Also, it too has a context pane, but you have to be a paid subscriber to Last.fm to use it. Exaile comes with an iPod plugin which I couldn't get to do anything. I also had stability issues when changing the volume mid-song, and Exaile doesn't use its screen real estate well. And if you only want iPod syncing, there's gtkpod, but I found it extremely slow and the layout was confusing.

One last note on iPod support, the iPod Touch supposedly won't work because it doesn't mount like a typical usb storage device (thanks, Apple). Instead you have to go through hoops like with the above link to get it to mount, and even then getting it to sync is far from certain. In that respect, Touches are like iPhones and iPads, a pain in the rear for open sourcers. Best to quit fiddling with Apple and get a real usb device that mounts like one.
Posted by Dan at 11:54 PM

Email ThisBlogThis!Share to TwitterShare to FacebookShare to Pinterest
Labels: Banshee, How Do I Do That?, iTunes